You are here: Home / How to / How Back to the Future Sneakers Became Iconic 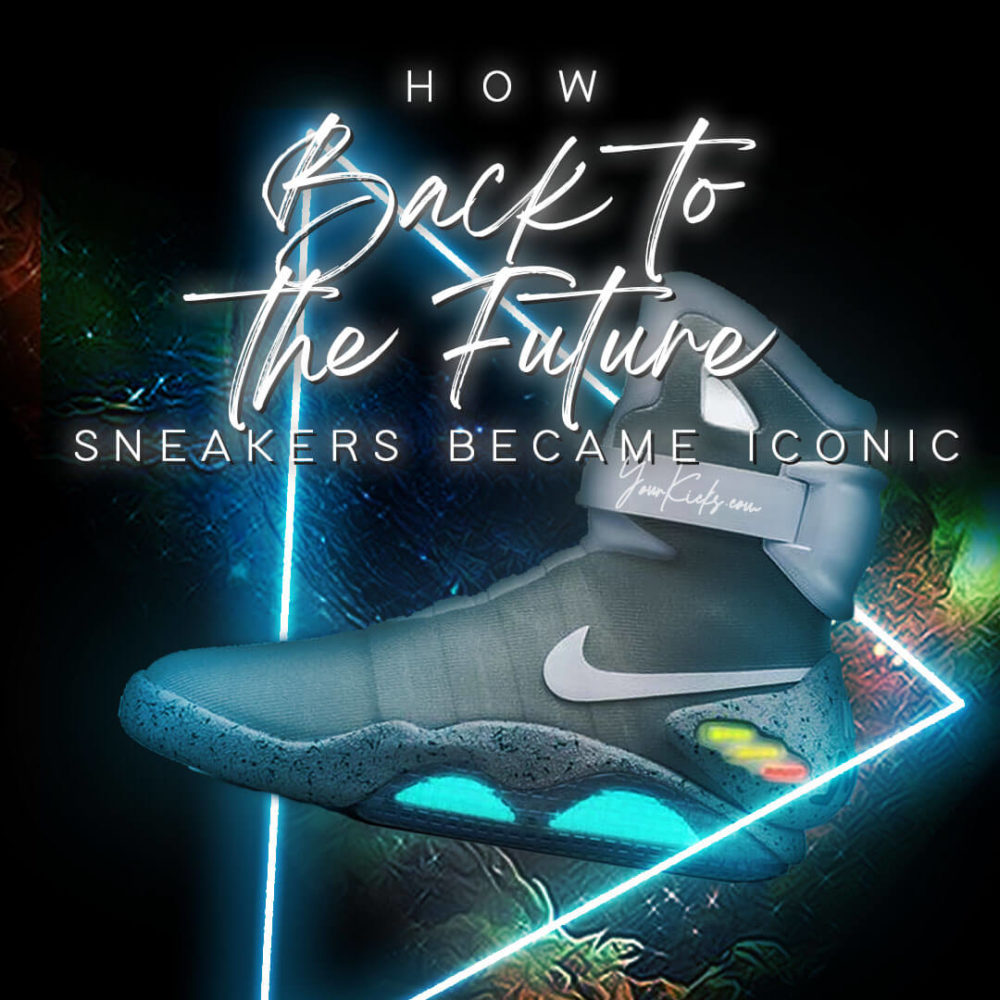 In the 1989 movie Back to the Future II, Marty McFly wore a pair of self-lacing Nike Air Mags that have become iconic in the sneaker community. Nike’s famous designer Tinker Hatfield recreated the pair in 2011and then again in 2016. It was released both times in limited quantities. The sneaker was so limited that only 1,500 pairs were released in 2011 in an auction style on eBay. The second time, only 89 pairs were released and these ones were self-lacing.

Besides being a sneaker from a once popular movie franchise, there are a few reasons why the Back to the Future Nike Air Mags hold a place in sneaker stardom.

The limited quantity of these sneakers is really the main factor behind why they are so iconic and sought after. The 2011 release was only 1,510 pairs. The 2016 release was even less with 89 pairs. These stock numbers are extremely low for a pair of sneakers so it made them almost impossible for a normal person to get. You had to have a lot of money to bid for them on eBay.

As many resellers who invest in sneakers know, a pair of shoes with a low stock number and a high demand will cause the aftermarket value on that pair of sneakers to skyrocket almost instantly.

The limited quantity of these sneakers is what started the hype around them. Barely anyone was going to be able to get a pair of them so it made people seek after them more.

The Back to the Future trilogy premiered in the mid-80s until the third and final movie was released in 1990. During this time, it made hundreds of millions of dollars and was a well-known movie for many.

Nike was able to tap into the same nostalgia of the mid-80s and early ‘90s by releasing the actual Nike Air Mag sneaker for people to buy. The same people who grew up watching Back to the Future were also the same people watching Michael Jordan dominate in the NBA at that time. Jordan was able to take Nike to the next level as a company and a brand.

This continued the hype around the Nike Air Mags in the sneaker community.

Nike created a Back to the Future themed commercial, called Back for the Future, to market the sneakers. The commercial featured Kevin Durant, Emmet ‘Doc’ Brown, Tinker Hatfield, and Bill Hader. The amount of starpower in the commercial alone was enough to drive the sneaker community crazy, nevermind the actual sneakers the actors were marketing.

The commercial starts with Bill Hader getting Kevin Durant a pair of Nike Air Mags in a Nike store at Lone Pine Mall. This was the same mall featured in the original Back to the Future movie. Then, Doc Brown runs into the Nike store and asks Bill Hader if he has any shoes, which Hader then shows to Brown. Brown questions whether or not the sneakers are self-lacing and Tinker Hatfield replies that the technology isn’t available until 2015.

The commercial continues with Brown figuring out he’s in the wrong year and blasting off in the parking lot to another time period.

The commercial has millions of views on YouTube and helped to stir the craze in the sneaker community.

The design of the Nike Air Mag sneaker continued the craze for many people. The sneaker has a unique shape to it that’s unlike any other sneaker available. It rises high on the leg and somewhat resembles a futuristic boot.

The sneaker also comes equipped with multiple lights on it that last a few hours per charge. At the time of the release, these kinds of lights on a sneaker had never been seen before the Nike Air Mag.

The box was a bright yellow and featured cut-outs for the sneaker to rest in.

No, the sneakers were not self lacing like Marty McFly’s were but still, the lights, box, and design of the sneaker were enough to cause enthusiasts to crave the shoe.

One reason that led a lot of celebrities to make bids on the sneakers and hype them up on social media was the fact that Nike was donating all proceeds of the 2011 pair to charity. Every cent spent on the Nike Air Mag sneakers was going to the Michael J. Fox Foundation for Parkinson’s Research.

This made many celebrities jump on board with the bidding and boosted the price of these sneakers through the moon. Most pairs were auctioned off for around $100,000 on eBay. The high auction and purchase prices of this sneaker were the final factors of why it holds such a high place in the hearts of sneaker enthusiasts. Basically, it’s like a shoe that almost every sneakerhead wants in their collection but almost no one can afford or track down. It’s the grail of all sneaker grails.

The bottom line for the Nike Air Mag sneaker is that all of its factors have led it to be a very sought-after sneaker and an iconic one.

Sneaker enthusiasts know how limited the shoe is and how expensive it is, which makes it even more sought after and valuable.

It’s based on a sneaker in a movie that was very popular when it was released and features the same concepts and designs of the actual sneaker in the movie.

The marketing and commercial for the sneaker tapped into the nostalgia of sneaker enthusiasts who watched the Back to the Future movies in the 1980s and watched Michael Jordan play at the same time.